In this post, we will look into the room “Ignite” from TryHackMe, which can be found on https://tryhackme.com

I started by scanning the living shit out of this box. It's the first time I'm going blind on a box without any prior knowledge of what I'm up against so it's hard for me to get a grip on things, more on that later :)

While those scans were running, I visited the page on my browser to see if it had a web app running. 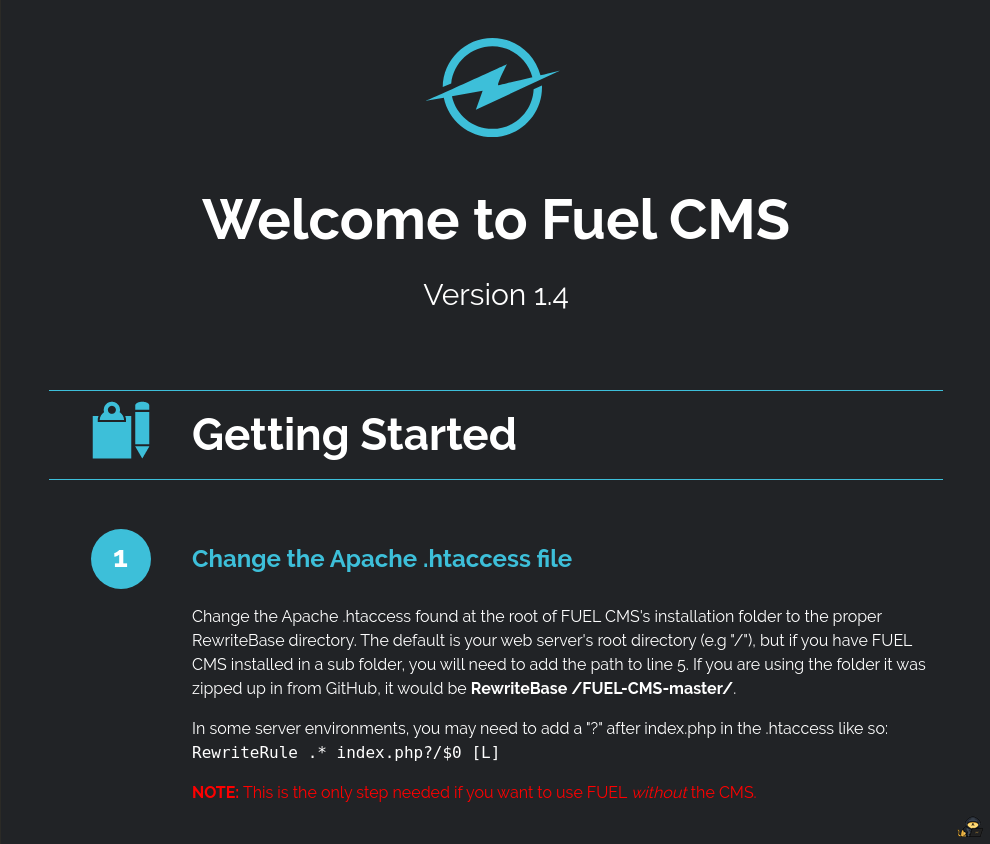 Looking at this page thinking to myself wtf is this, I started researching fuel CMS and what it's for. I then figured out it's some kind of WordPress like web app. Looking a bit deeper in the project I understood it was running CodeIgniter a PHP5 framework. Knowing this there probably is an exploit out there for this. Going through exploit-db I found the CVE-2018-16763 exploit. Knowing from the code and the title of the attack it's a remote code execution one.

After figuring this out I went back to my nmap scans and saw that they were finished. I found the version of apache that they where using and some useful links provided by the nmap script. I started looking around the first page and saw some cool information I could use, I wrote down the different links from the page and at the bottom I found default login credentials.

When I saw this my brain finally clicked. The user didn't set anything up this is a default installation of Fuel CMS. I then decided to inspect the robots.txt file:

And to my big surprise I found a path for the fuel page. I then visited it and put the admin credentials in

Cool I found an entry point to the Fuel CMS :) without thinking further, (BIG NO NO!) I started thinking to myself "Oh shit! I'm gonna upload some php backdoor" so I rolled out a simple php script that I would use for that:

But it didn't work, uploading a file on the server got me this error:

At that point I was confused as hell, my file was four fucking lines, how can it be too big?! But whatever I kept going and finally found a way to upload it by setting a few variables in the main dashboard of the server. Now trying to visit the page was an other story, when I visited it I got error 404 now that part is so confusing for me because on the admin panel it was there... Why?!?!? But OK so after doing a bit of research on the room I found out that I should probably be using the exploit I found on exploit-db instead of creating my own. LOL.

So after that I ran the script by swapping a few values around and removing their proxy settings inside of it, bang! I got a sweet shell.

Now I am not sharing a screenshot of my terminal because the script would print error messaged between each output, no clue why but who cares? It works :) Looking back at the write-up thinking this shell is terribly shit I see that this bloke uses phpbash.php what a genius so I downloaded the php file and put it on a web server and then ran a wget on the box to download the script.

I then tried to visit the page and yup it worked better than my shady script.

I then looked around for a bit on that shell and thought "wait, the second flag name is root.txt I need to be root!" so instead of looking for the first flag I started trying to do some privesc, so I typed sudo -l in the terminal and realized that I needed a tty so I wondered if I could just do a reverse ssh shell to my machine and go from there and after 100 failed tries I gave up and went to the home directory of the user and found the first flag :) cool. Now that that was done I decided to go back to messing around with tty's.

After a few hours I went nut's why the hell can't I figure this thing out and at that point I'm also starving to death (not the best of ideas LOL) so I looked back at the write-up I was on before and I saw that he managed to do it. So I was on the right track but I just didn't know how to do it. So after some hard understanding (copy-paste) I managed to get some progress

Now in the tty session I started going through all of the files on the system looking for some privescs but looking back at my research phase I saw all of the config links that I wrote down. I saw a MY_config one but nothing was there, even the config.php was useless. Bloody hell, at that point I felt like I was just wasting my time reading weird ass config files and then, the light, I displayed the content of the database config and I saw something beautiful! 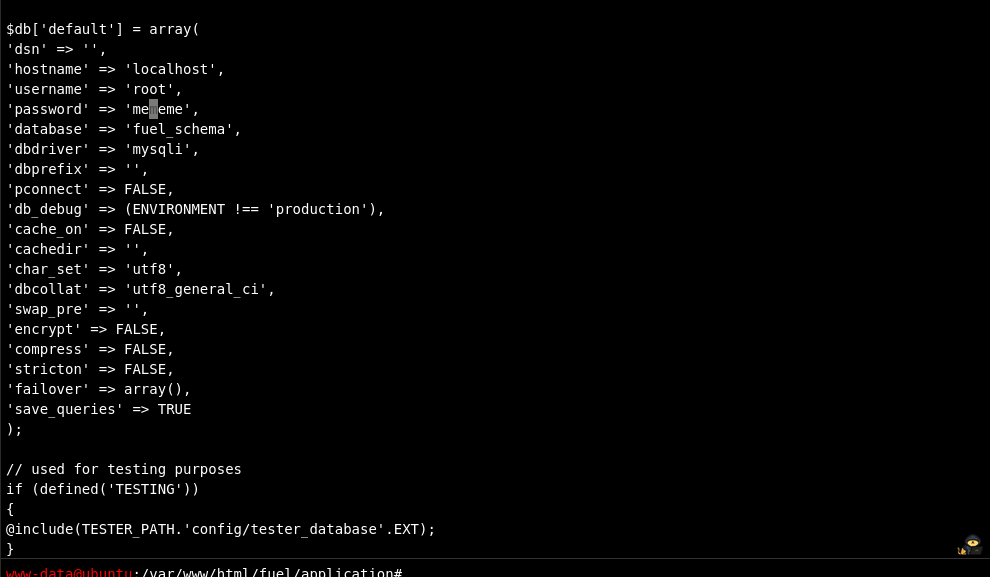